The International Atomic Energy Agency (IAEA) came into being in 1957, a few years after US President D Eisenhower proposed its creation in his famous “Atoms for Peace” speech delivered at the UN General Assembly on 8 December 1953.  The IAEA Statute, which was approved on 23 October 1956 by the Conference on the Statute of the International Atomic Energy Agency held at UN Headquarters in New York, came into force on 29 July 1957.  159 countries are Members of the IAEA which employs a team of over 2300 professionals and support staff drawn from 90 countries across the world.

The IAEA is an autonomous independent inter-governmental organization whose relationship with the UN is governed by the “Agreement Governing the Relationship between the United Nations and the International Atomic Energy Agency” which came into force on 14 November 1957.  In accordance with its Statute (Article XII C and Art III.B 4) and also this Agreement, the Agency is required to report to UN General Assembly/ Security Council the cases of non-compliance by a Member State with its safeguards obligations.

According to the Statute of the IAEA, the principal objective of the Agency is to “accelerate and enlarge the contribution of atomic energy to peace, health and prosperity throughout the world” and to ensure so far as it is able, “that assistance provided by it or under its supervision or control is not used in such a way as to further any military purpose”.

The Agency thus functions under two broad categories namely: (i) promotional activities, which it is expected to carry out through technical assistance to the interested Member States in areas of nuclear power, applications of nuclear energy, strengthening of safety and security measures etc and (ii) verification activities, which it carries out through implementation of safeguards, which it can apply to a given State’s activities in the field of atomic energy, at the request of that State.

There are two ‘decision and policy-making organs’ of the Agency: the Board of Governors and the General Conference.  The Board of Governors has 35 Members of which 13 are permanent members designated every year by the outgoing Board, and are those Member States which are “most advanced in the technology of Atomic Energy including the production of source materials”. The remaining 22 Members (11 every year) are elected by the General Conference for a period of two years; these elections as a tradition are through nominations by consensus by 8 Areas, (i) North America (ii) Latin America (iii) Western Europe (iv) Eastern Europe (v) Africa (vi) Middle East and South Asia (vii) South East Asia and the Pacific and (viii) Far East (as mentioned under Article VI A 1 of the Statute) on the basis of allocation of slots every year to them as per their share as envisaged in the Statute.

The Board of Governors meets four times in a year either to make decisions or to make recommendations to the General Conference (GC), which meets once in a year usually in the month of September.  The Board of Governors has two standing Committees: (i) Programme and Budget Committee and (ii) Technical Assistance and Cooperation Committee which are entrusted with the work of developing Agency’s Programme and Budget and Technical Cooperation Programme respectively; these Committees meet once in a year usually in the month of May and November respectively. Special sessions of the Board can be organized if required to address any specific issue. The current Chairman of the Board of Governors is Ambassador Mikaela Kumlin Granit, Permanent Representative/Ambassador of Sweden.

The Director-General of the IAEA is Mr. Rafael Mariano Grossi who assumed office on 3 December 2019. Mr Grossi is a diplomat with over 35 years of experience in the field of non-proliferation and disarmament. In 2013, he was appointed Ambassador of Argentina to Austria and Argentinian  Representative to the IAEA and other Vienna-based International Organizations.

The IAEA Secretariat is headquartered in the Vienna International Centre, Vienna.
Wagramer Strasse 5, A-1400, Vienna, Austria
Tel No. +43 1 2600 0
Website: www.iaea.org

India and the IAEA

India has played an active role in the IAEA since its inception. The father of the Indian nuclear program, Dr. Homi Bhabha, was responsible for Vienna’s selection as the seat of the Agency. As the President of the 1955 Geneva Conference on the Peaceful Uses of Atomic Energy, which led to the creation of the IAEA, Dr. Bhabha, a lover of classical western music and Opera, cast the deciding vote in favor of Vienna over its rival Geneva.

Being a designated Member, India has served on the Board of Governors of the IAEA since its inception.  The other important positions held by India include President of the General Conference in 1970, 1979 and 1986.  Between 1960 and 1986 India has served as Vice President of the General Conference for as many as 15 times.  India was also Chairman of the Board of Governors during 1970-71 and 1994-95.

India has throughout underlined the importance of the Agency’s role in the promotion of peaceful uses of nuclear science and technology including nuclear power while maintaining due support for its safeguards related responsibility.  India actively participates in IAEA’s Advisory Groups and Technical Committees.  India also contributes to the Agency’s activities by way of providing experts and conducting training programs, workshops and occasionally providing equipment.  India is one of the founder members of the IAEA’s International Project on Innovative Reactors and Fuel Cycles – INPRO and contributes the US $ 50,000 annually towards the program.

India has close cooperation with the Agency’s Programme of Action for Cancer Therapy (PACT) and would be donating under PACT its indigenously developed Cobalt teletherapy machine (Bhabhatron II) to Sri Lanka and Namibia as a step towards affordable treatment of Cancer. A similar machine was donated to Vietnam in 2008.

India and the IAEA signed an Agreement for Application of Safeguards to Civilian Nuclear facilities in India on 2 February 2009. The Agreement entered into force on 11 May 2009.

DG, IAEA Mr. Yukiya Amano called on the Hon'ble PM, Mr. Narendra Modi during his visit to India in March 2015. 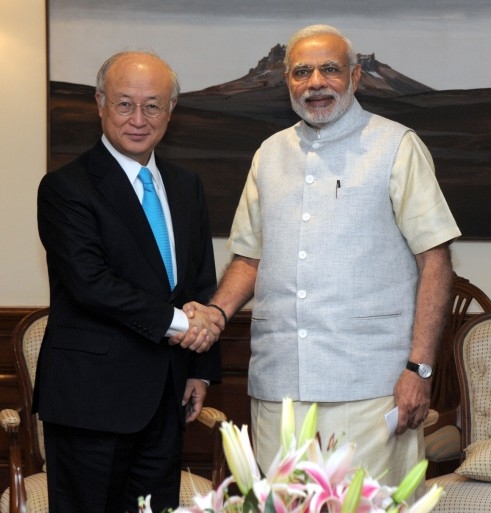 To know about India’s nuclear energy program, please access the official website of the Department of Atomic Energy of India